Today is the 75th Anniversary of D-Day.

So many brave men landing on beaches, flying in aircraft, and dropping from the sky into enemy territory….. brave men…..

I had read about World War II in books and had seen the movies about D-Day and the war.  I could see it and imagine what those brave men did and saw, yet nothing really prepared me for the reality of that war.  It was not until April 2000, when my husband, our sons and I visited the beaches of Normandy, that I truly understood the enormity of the sacrifices and bravery of the men that day on the beaches of Normandy and on the surrounding land and in the sky.

19 years ago, we traveled to Normandy, France, to visit the beaches and see for ourselves the history of that day.  We planned the trip and the stops we would make in order to show our boys what happened and to show them the bravery of our men in uniform.  It would be two days, packed with history. 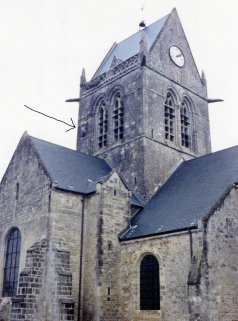 We started out by stopping in St Mere Eglise, where the 82nd Airborne Division parachuted in on D-Day.  The paratroopers landed in and around the town and fighting began with the Germans.  We were there to see the Airborne Museum and to see the church, where John Steele landed, his parachute getting caught on the steeple.  He hung there for two hours while the fighting raged on, until the Germans cut him down and took him prisoner.  I couldn’t imagine it, even after seeing the movies in which this scene was depicted, yet there on the church steeple was the effigy of John Steel, hanging there.  How frightening that must have been for that soldier, to be so exposed to the enemy with no way to escape.  Seeing that church and the museum, I knew this was going to be a trip that would have a long-lasting impact on me and on my family.

Utah beach was the first beach we visited.  Here American soldiers landed on June 6th, 1944.  We had to see the beach first, before the museum… we had to see where those brave men landed that day…. I thought it would just be a beach by now with no evidence of the war.  It had been 56 years since the landings of D-Day.  I was surprised and shocked to see so many of the obstacles used by the Germans still on the beach, where they were placed to deter any invasions.  We could see the wreckage in the water of the American watercraft that brought our soldiers ashore.  The gun mounts used by the Germans and the remains of cement bunkers were scattered throughout the dunes.  This made the war real.  Here it was for all future generations to see.  The Utah Beach museum was built around W5, a German Block House.  It was eerie to see what remained, to know that Germans were here, waiting…..

We started our second day in Normandy by stopping in a little village, Graignes, to see a

church there.  On D-day, paratroopers were dropped here, accidently.  This was not where they were supposed to be, so far into German held territory.  And the villagers here helped those American soldiers, hiding them and helping them to go back into the marshes to recover their gear and equipment over the days following D-Day.  When the Germans discovered the Americans were there, a fight ensued, and the village bore the brunt of the German revenge.  The remains of the church, set on fire by the Germans, now stands as a memorial to the American soldiers who lost their lives here and to the villagers who were killed by the Germans in retaliation for their kindness to American soldiers, to include two Priests.  A solemn place.  Standing in what was left of the church, I couldn’t help but feel the strength and courage of those villagers as they helped the soldiers there to liberate them.  Their courageous spirit lives on in that memorial to their sacrifice.

Omaha beach was more of a beach, with monuments along the road above the beach, reminding visitors what happened here.  But unlike Utah beach, the debris and obstacles were not visible, long removed.  I watched others walking on the beach and wondered if they knew what occured here on that day in 1944.  So many fought here to defeat evil.  We then went to the museum just up the road.  The museum told the stories of those who fought here and those who died here.  Our boys were learning so much about a war that was way before their time.  I could see the impact it was having on them….

I asked both of my boys recently what stood out to them, and they both said the craters.  Point du Hoc was one stop on that second day and it was the one that stood out to all of us as the depiction of war.  Point du Hoc is a surreal landscaped, high atop a 100-foot cliff that overlooks the English Channel and is the high point between Utah and Omaha beaches.  Perfect for the Germans to spot any Allied Forces coming in.  It was here that Army Rangers, using ropes and rickety ladders, scaled the cliff to reach the top and take Point du Hoc.  The U.S. Navy had began bombing before the Rangers began to scale the cliff and the craters were evidence of that bombing, or as one of my sons said evidence “of the madness of that day”.  We walked the land there, covered with craters from the U.S. bombs and it felt like we were walking on the moon.  The craters were big….. not just big, but huge.  And 56 years later they were still there, a lasting reminder to the world of what war looks like.  Hundreds of craters.  Everywhere.  As far as we could see.  And bunkers.  And gun mounts.  We were shocked by what we saw.

And then we walked to the edge of the cliff, looking down….. how did those Rangers make it up that cliff?  I could not fathom what must have been going through their minds as they climbed up the cliff, with gunfire and grenades raining down on them.  The fear.  They were being killed by the Germans and yet they persisted.  And they took Point du Hoc.  Those brave men…… giving so much for the world and for the freedom they believed so strongly in.

Point du Hoc remains the most impactful part of our trip to Normandy.  The craters.  The cliff.  The lives lost.  And the brave men who fought for freedom.

Later, as we walked through the Normandy American Cemetery, I could not help but to

be sad for the lives lost.  And grateful.  Grateful for the brave men.  Grateful that these men were willing to fight for and die for our country and for others in the pursuit of freedom for all.

Many fought gallantly in World War II.  And I will remember and honor their courage and their sacrifice.  75 years ago today, men stormed the beaches of Normandy and dropped inland, all willing to die for this fight and for others.  Some came home injured, but alive.  Some came home and never talked about that day or the war.  Some lost their lives, buried in American Cemeteries overseas or brought back to the U.S. for burial.  Some were never found… still missing in action.